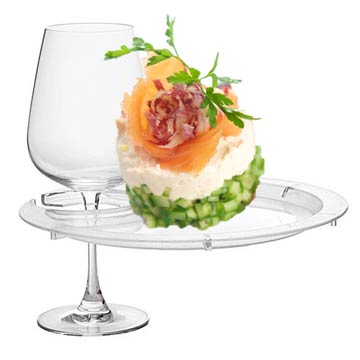 Cooking and dining with friends:
Gourmets on the Wackerberg

Cooking and dining with friends:
Gourmets on the Wackerberg

What could be nicer than eating and drinking with good friends?
Some say: cooking together. For them, the fun in preparing the dishes is the ideal overture for enjoying the self-created creations.
Others don't have so much confidence in their own imagination (and performance) at the stove and prefer to leave the work to the professionals.

Waldquartier Wackerberg gives gourmets the freedom of choice - cooking events with like-minded people, feasting in the excellent restaurants in the surrounding area or visiting regional gourmet events and degustations.

»It is better to enjoy and regret than to regret not having enjoyed.« 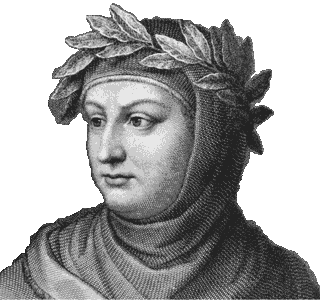 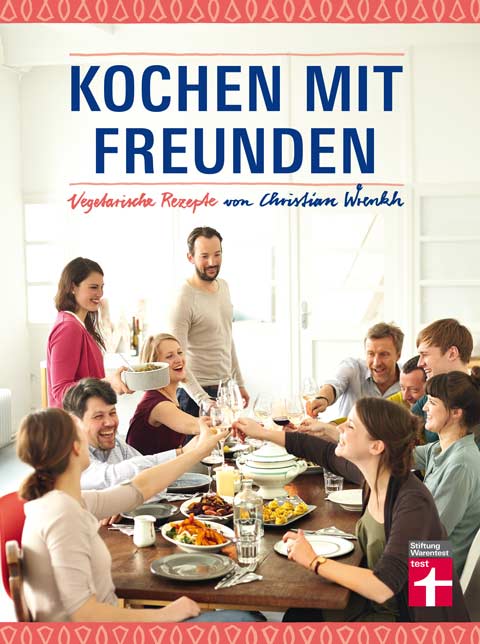 From the simple preparation of food to a social event - cooking has obviously made a career, especially as a social experience. The Internet is full of tips and recipes, and the Stiftung Warentest even wrote its own brochure on the subject.
Since the authors believe that men too often prefer meat-based delights and therefore first of all have a common barbecue evening in mind, they present only vegetarian dishes in their publication.

The first step on the way to the cooking event is the purchase of the pre-products. Well - Aldi and Lidl, Penny and a big Rewe market are all located in Kall, no more than 10 minutes by car from Wackerberg. But wouldn't it be a little boring to fill up the stocks for the connoisseurs' rounds with the well-known discounters and supermarkets?
Today, practically every ambitious restaurant advertises "fresh regional products". And anyone who comes to the Eifel region has a large selection of local traders or farmers' farm shops to choose from. The regional brand Eifel was established to market them with an overview of original Eifler products and the corresponding sales points.

Every good craftsman pays attention to his tools, and for a (hobby) cook this is the kitchen equipment. In addition to the technical equipment, a second resource is also important, especially if several artists of the carving knife work simultaneously: Space. 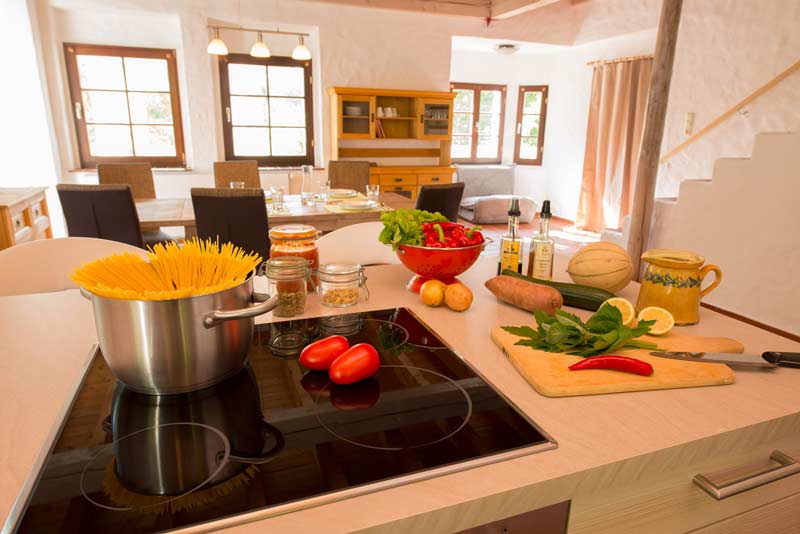 And last but not least, there is the communicative component: the work is much more fun when it is done in front of the amazed audience. The good advice from the spectator ranks is simply priceless:"Now taste it and maybe season it up a bit..."

Even if the equipment at home, from stirrer to juicer, is quite complete - at the latest with the other two criteria, it can literally get tight.
In the Waldquartier Wackerberg, on the other hand, it is not only the refrigerator that has XXL format. The kitchen is open and integrated into the large dining room, where up to 16 guests can be seated.
Of course, there is an oven, 4 ceramic hobs, a microwave, 2 coffee machines and a tea maker, not to mention various small appliances.
And what about the dishes?
The dishwasher does the job afterwards - quite uncommunicatively.

And what if the decision was made in favour of a barbecue?
Then the mobile charcoal grill comes into action, or the event is simply moved to the forest: an open, fully equipped grill hut is 70 m away from the house for a real community experience. 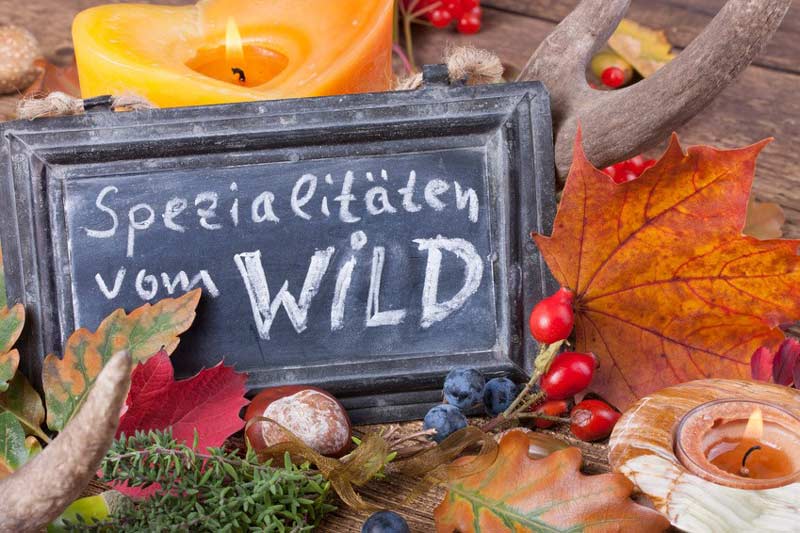 With its extensive forests, the Eifel is an attractive hunting area. Whereas in the past, venison was only on the menu of nobles, today there are butcher's shops that specialize in it - and of course also supply the "common people".
The butcher's shop Steffen in Gemünd has made a special name for itself, supplying its customers with meat from Eifel hunts throughout the year. 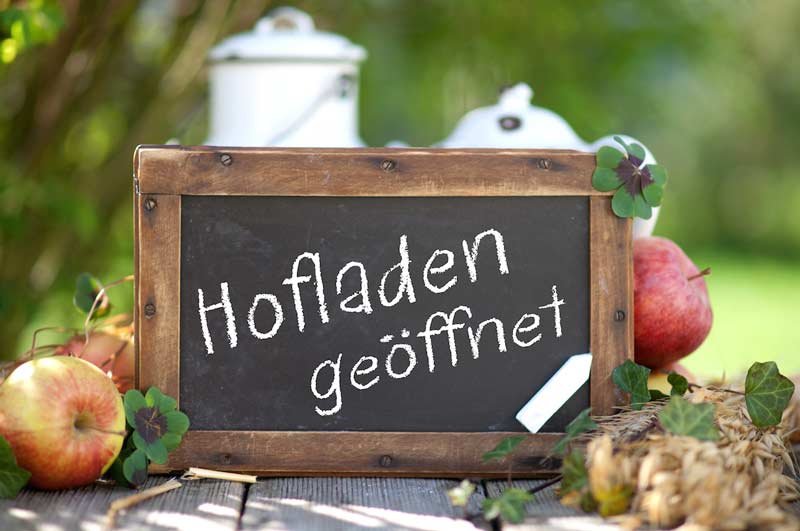 Directly from the farmer

Shopping at the farmer's farm shop is a rather unusual pleasure for city dwellers, always combined with a short excursion through the Eifel.
Good examples are the Kolvenbacher Ziegenhof (= goat farm) near Bad Münstereifel, which has already made it on television, the poultry farm Walter in Kall Sistig, the farm shop near Mechernich with meat and sausage products as well as bread and jam from their own production, or the Gröner Hof near Hillesheim with Eifel mountain cheese and young bull meat. 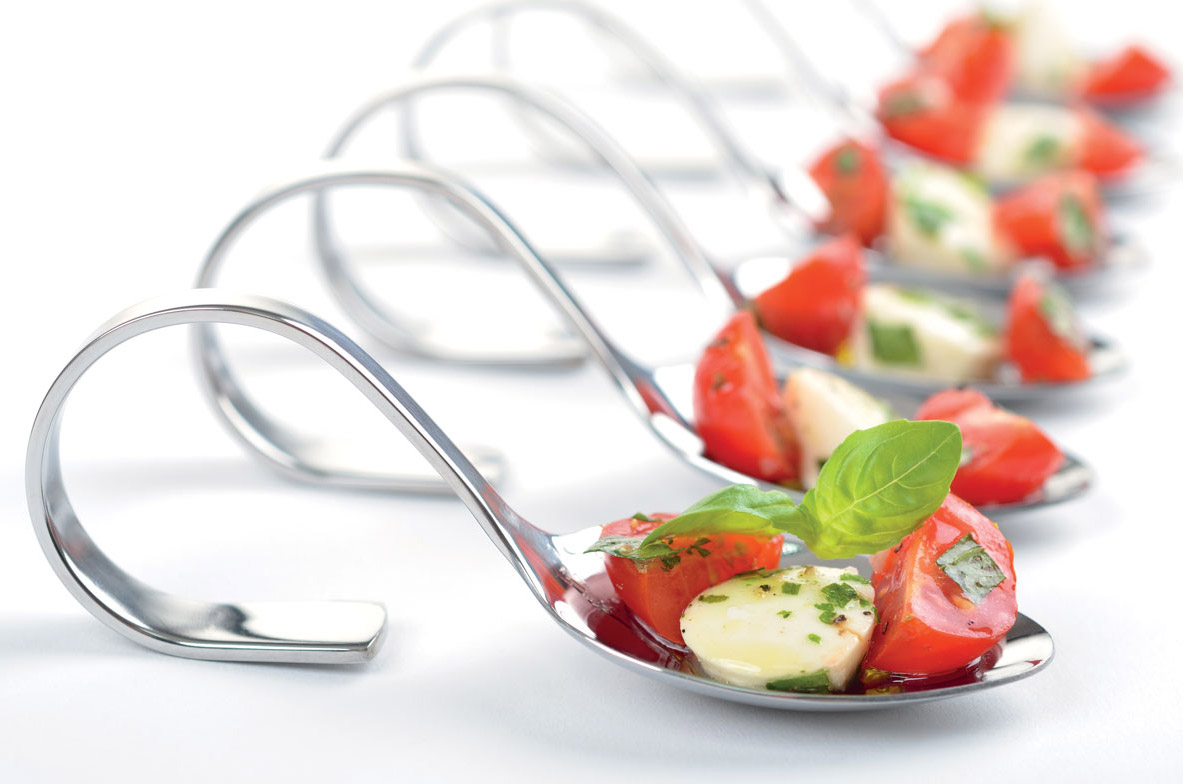 Sometimes it has to happen quickly - the focus is not on cooking, but on eating. It may not be easy to convince Delivery Hero, Lieferando or any other delivery service to drive a few kilometres through the forest. But that's not even necessary:
Right in Kall, there are various restaurants that like to supply the Waldquartier Wackerberg, including Peter Pan for friends of pizza, pasta and salad.


If you are more into kebab and other Turkish fast food, just call Ali Baba. The China Thai-Restaurant Zhao delivers East Asian specialties free of charge.
By the way, all three restaurants receive good ratings on social networks and Google.

Selected food, decoration and presentation (the eye eats too!) - this is the core competence of catering specialists.
The "local hero" in Kall, Schmidt Buffetservice, gets very good marks from his customers. In Gemünd, on the other side of the Wackerberg, the butcher's shop and party service Metzgerei und Partyservice Steffen has focused on Eifel meat, sausage and game.
And from Euskirchen, Helga Schroeder and her party service provide to smaller and larger events, including a party in the Waldquartier Wackerberg with a great Spanish-Mexican buffet. 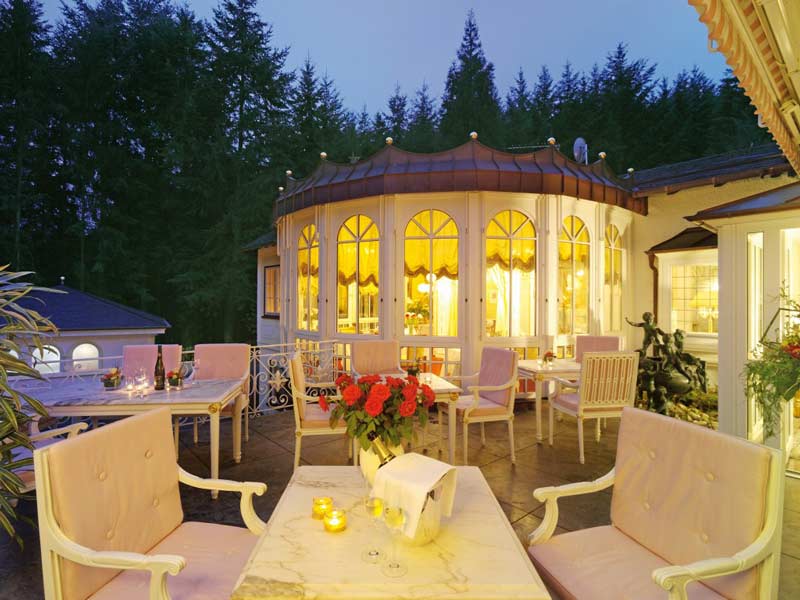 The Michelin testers obviously have a soft spot for the Eifel:
No less than five gourmet temples have earned a star - or several of the coveted awards - in the region. In the Ahr valley these are the Brogsitter, (1 Michelin star

, towards Moselle the Waldhotel Sonnora

.
The newest (Michelin) star rose above Nideggen at the beginning of 2019: The Castle Restaurant Brockel Schlimbach

, which only started in 2017, was able to score with "new German cuisine".

If you want to see several German star chefs in action closer to the Wackerberg, head for the Landlust at Flamersheim Castle near Euskirchen. At the four-day Eifel Gourmet Festival in spring, the chefs create a multi-course menu with appropriate wine accompaniment. But the guest should be prepared to spend a few hundred euros ....

At at a much lower price tag and yet tasty, restaurants around Wackerberg offer their creations. In Kall, Schleiden and Gemünd, in Heimbach and Bad Münstereifel a surprising variety of culinary experiences awaits the guest - from the castle restaurant to the monastery tavern.

Five gastronomic institutions in the Schleiden area have been organising the "connoisseurs' weeks" in autumn for some years now:
• the restaurant of the Schleiden Castle;
• the Café-Restaurant Drehsen-Theisen;
• the Kermeterschänke;
• the Gemünder Parkrestaurant and
• the Hotel Friedrichs which, however, does not always appear stable in service.

Throughout the month of October, specially prepared culinary offers with a focus on regional products are served, seasoned with an entertaining programme of events. 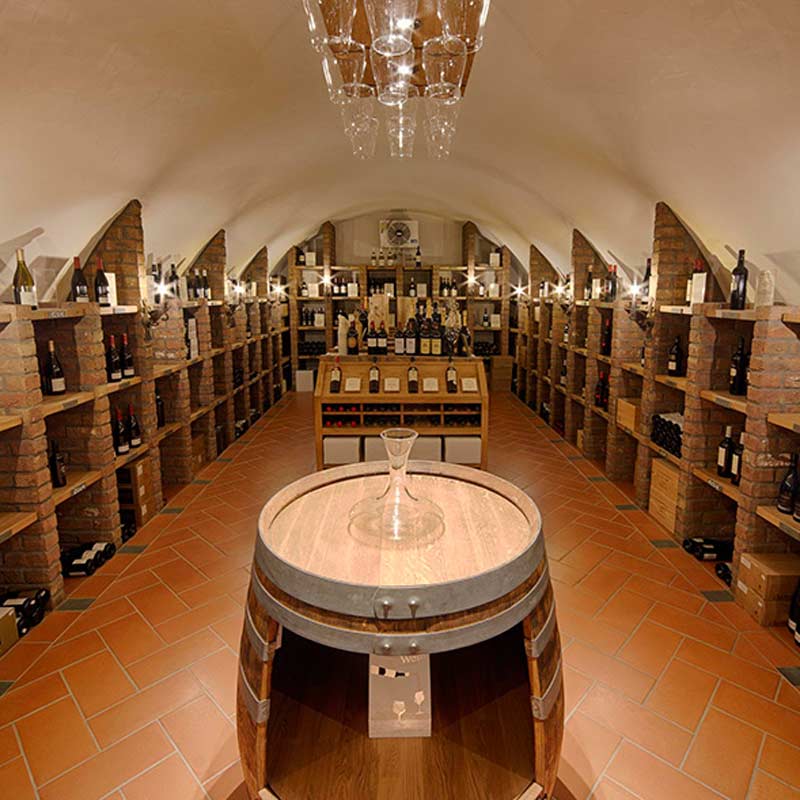 Wine from the Eifel? The good wines of Ahr and Moselle have been known for a long time, as have been the wine festivals in autumn. In Kall, the Marc Baum, who studied oenology, has rejuvenated the family business and regularly organises wine tastings and culinary surprises in his own vaulted cellar, as well as with friends of the region's gastronomy.

Hiking makes you hungry. So what could be more reasonable than to plan a stop for the cultivated meal? The Rursee-Touristik developed four routes with scenic - and culinary highlights and the Eifel National Park offers various gourmet arrangements, too. 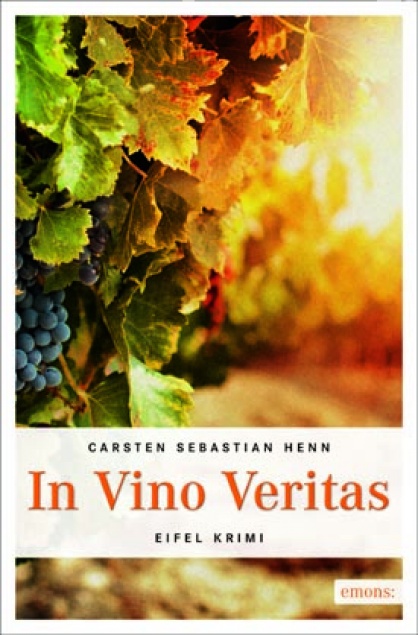 Carsten Sebastian Henn is a restaurant critic at the Kölner Stadtanzeiger, co-owner of a vineyard, and author of detective novels.
His stories take place in the Eifel, in the Ahr valley, where an excellent red wine is cultivated.
His books invite you to get in the mood for a good drop and a tasty meal...


A corpse for dessert 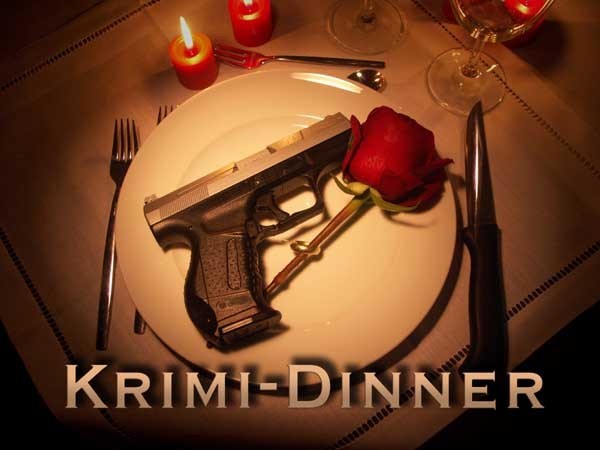 Crimes and tasting are sometimes an interesting symbiosis - especially in the Eifel!
So guests experience every few months a "night of terror" on Nideggen castle. Of course, it is not the gastronomic quality that is meant, but rather the thriller dinner as a culinary and intellectual pleasure. The organizers advertise with "cozy ambience and upscale gastronomy in a historical atmosphere".
Comparable crime dinners will be held in the Krimi-Hotel Hillesheim, in Burghaus Kronenburg or in the Restaurant Steinsmühle (Bad Münstereifel).

Usually, an actor's troupe mixes with the - suspected evil - guests that will be involved in the plot. Whoever fundamentally rejects so much of his own engagement while eating is better served with a gastronomic reading.
Especially busy on the road is author and publisher Ralf Kramp - always a guarantee for an entertaining evening!
The other authors of regional detective stories can be found at dinner in September of even years at the crime days "Nordeifel-Mordeifel", in odd years at the crime festival "Tatort Eifel" in the Vulkaneifel.